Since the time of the Governor's Declarations of Public Health and Civil Preparedness Emergencies on March 10, 2020, he has ruled the State of Connecticut by Executive Order, preventing the legislature from having any say in those orders.  That form of government is not the one authorized by the Connecticut Constitution - which provides for three branches of government, with separate powers and distinct powers to each, in order to provide, by and through these powers, for checks and balances by and between the branches.

Yesterday, the Governor announced that he will be renewing his declarations.  Myself, and my fellow members of the Connecticut General Assembly object to this continued rule of the State of Connecticut, by one person, unchecked by the legislature. That being the case, this morning we issued this press release: 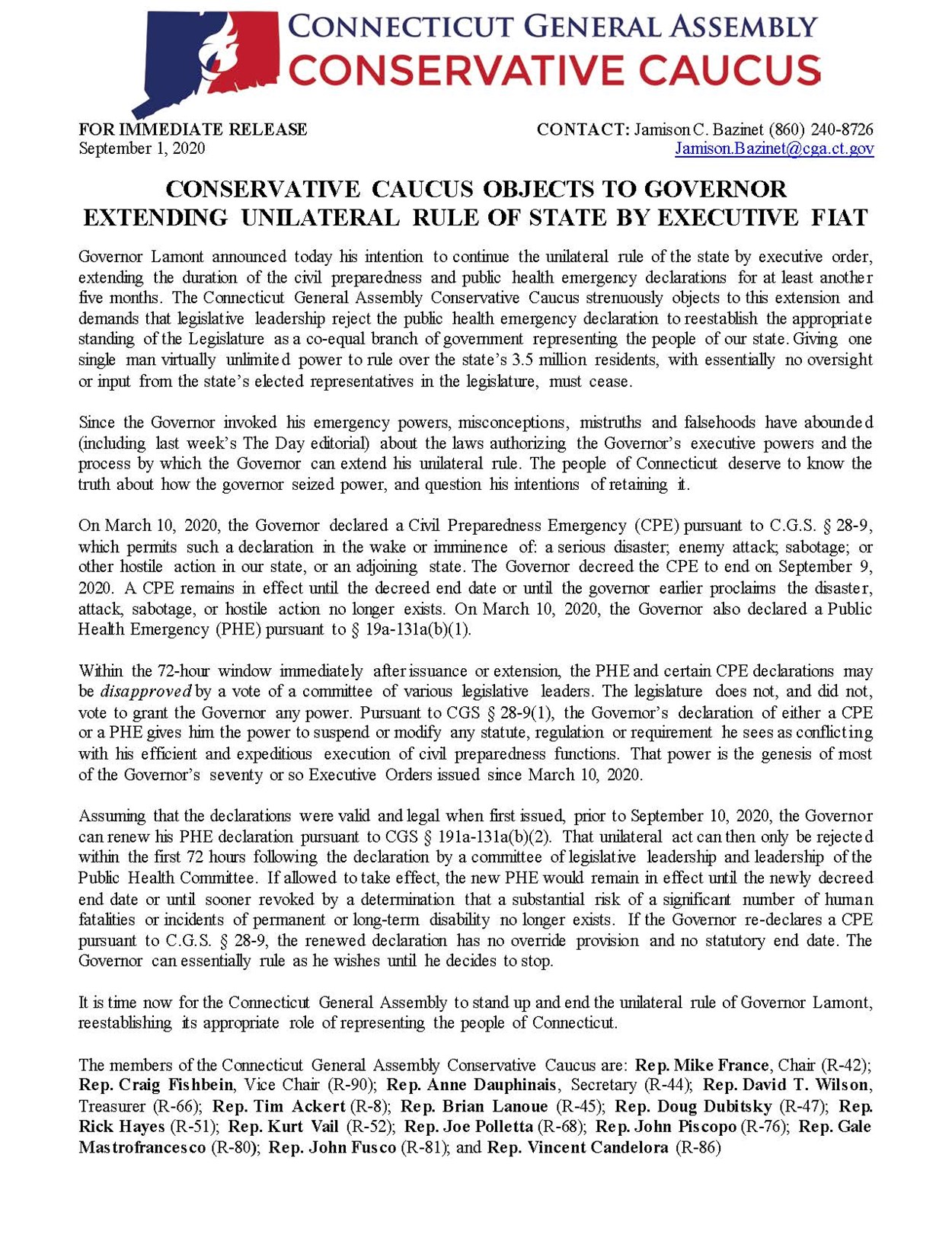 Governor Lamont announced today his intention to continue the unilateral rule of the state by executive order, extending the duration of the civil preparedness and public health emergency declarations for at least another five months. The Connecticut General Assembly Conservative Caucus strenuously objects to this extension and demands that legislative leadership reject the public health emergency declaration to reestablish the appropriate standing of the Legislature as a co-equal branch of government representing the people of our state. Giving one single man virtually unlimited power to rule over the state’s 3.5 million residents, with essentially no oversight or input from the state’s elected representatives in the legislature, must cease.

Since the Governor invoked his emergency powers, misconceptions, mistruths and falsehoods have abounded (including last week’s The Day editorial) about the laws authorizing the Governor’s executive powers and the process by which the Governor can extend his unilateral rule. The people of Connecticut deserve to know the truth about how the governor seized power, and question his intentions of retaining it.

On March 10, 2020, the Governor declared a Civil Preparedness Emergency (CPE) pursuant to C.G.S. § 28-9, which permits such a declaration in the wake or imminence of: a serious disaster; enemy attack; sabotage; or other hostile action in our state, or an adjoining state. The Governor decreed the CPE to end on September 9, 2020. A CPE remains in effect until the decreed end date or until the governor earlier proclaims the disaster, attack, sabotage, or hostile action no longer exists. On March 10, 2020, the Governor also declared a Public Health Emergency (PHE) pursuant to § 19a-131a(b)(1).

Within the 72-hour window immediately after issuance or extension, the PHE and certain CPE declarations may be disapproved by a vote of a committee of various legislative leaders. The legislature does not, and did not, vote to grant the Governor any power. Pursuant to CGS § 28-9(1), the Governor’s declaration of either a CPE or a PHE gives him the power to suspend or modify any statute, regulation or requirement he sees as conflicting with his efficient and expeditious execution of civil preparedness functions. That power is the genesis of most of the Governor’s seventy or so Executive Orders issued since March 10, 2020.

Assuming that the declarations were valid and legal when first issued, prior to September 10, 2020, the Governor can renew his PHE declaration pursuant to CGS § 191a-131a(b)(2). That unilateral act can then only be rejected within the first 72 hours following the declaration by a committee of legislative leadership and leadership of the Public Health Committee. If allowed to take effect, the new PHE would remain in effect until the newly decreed end date or until sooner revoked by a determination that a substantial risk of a significant number of human fatalities or incidents of permanent or long-term disability no longer exists.  If the Governor re-declares a CPE pursuant to C.G.S. § 28-9, the renewed declaration has no override provision and no statutory end date. The Governor can essentially rule as he wishes until he decides to stop.

It is time now for the Connecticut General Assembly to stand up and end the unilateral rule of Governor Lamont, reestablishing its appropriate role of representing the people of Connecticut.